26Jul 2019 by Michael Whitlock No Comments 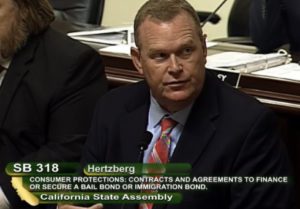 Mike Whitlock testifies in opposition to SB 318 in the California Assembly Committee on Insurance.

Last week the Department of Justice announced 3,100 Federal inmates will be set free under the First Step Act of 2018.  The acceleration of release is brought about by the Act’s provision to increase time credited for good behavior.  The cost of implementing the FSA will cost $75 million annually, a cost which is sure to increase over time.  The Risk and Needs Assessment System (RNAS) will be used to find those federal prisoners that may meet the qualifications for pre-release.

The FSA was sold on the fact its implementation would only impact convicted felons doing time for minor drug offenses. We’ve heard this sales pitch before.  Supporters of California’s Proposition 47 and 57 said reducing felony crimes to misdemeanors and granting early release to state inmates would save money and make the state safer. I would argue that it did neither, in fact these changes made California less safe for law-abiding citizens.

Fox News reported earlier this week, “of 2243 inmates released under FSA, only 960 had been incarcerated on drug-related offenses.” The remaining inmates had been serving time on crimes ranging from possession of weapons and explosives to sex offenses, robbery and homicide.   For those crimes where a victim was involved, what say did the victim have in their assailant’s early release?

While the FSA will be using the RNAS to evaluate those inmates who may qualify for early release from prison, pretrial risk assessment schemes used to evaluate new arrestees to determine release pending trial has come under heavy and justifiable attack.  The most recent challenge to the use of risk assessment tools comes from a group of academics from universities across the country including US Berkeley School of Law and Harvard Law School.  An open statement signed by twenty-seven prominent researchers titled Technical Flaws of Pretrial Risk Assessments Raise Grave Concerns claims, “Today’s pretrial risk assessments are ill-equipped to support judges in evaluating and effectively intervening on these specific risks…”basically, these tools are worthless.

A letter signed by three of the authors of the Technical Flaws report was sent to California Senator Robert Hertzberg, Assembly Member Rob Bonta and The Judicial Council of California for consideration.  Sen. Hertzberg and Assem. Rob Bonta were the authors of SB 10, passed by the California Legislature and signed by Governor Brown in 2018.  SB10 creates a pretrial system, once implemented, will rely on a pretrial risk assessment scheme to make pretrial release decisions and preventative detention (believed to be unconstitutional) an option for those deemed to be a risk to public safety.

The authors state in their letter, “Although pretrial risk assessment tools are often promoted as an essential part of bail reform that can help judges make more informed decisions, these tools suffer from serious methodological flaws that undermine their accuracy and effectiveness” and that “the technical problems cannot readily be resolved.”  gain, worthless.

Legislatures in Colorado, Florida, Idaho, Oklahoma, and Texas, among other states, rejected pretrial risk assessment tools in 2019 alone. Alaska has rolled back its bail reforms after seeing marked increase in crime and failures to appear.  Chicago’s new mayor Lori Lightfoot and Chicago Police Superintendent Eddie Johnson have recently raised concerns about their city’s move away from cash bail, as it relates to offenders charged with possession of unlicensed firearms.

Individuals who may have once sided with pretrial risk assessment tools and the reduced use or outright elimination of bail are finally seeing the light; these reforms are not living up to the hype.  The concept of releasing people on their own recognizance — AKA, pretrial release with a promise to appear, is simply not working.  This two-fold solution is simpler than that and immensely more effective: first, allow those who can afford bail to post bail using an unbiased preset bail schedule; and second, grant bail hearings to those who remain in custody after 48 hours to determine if they are eligible for a bail reduction or release on their own recognizance.  The answer does not have to be complicated to be effective.  Sometimes, the obvious solution is the best solution.