18Oct 2021 by Michael Whitlock No Comments 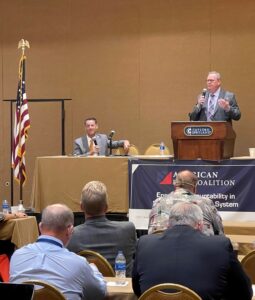 It’s been a busy few weeks as fall bail conferences have been held in abundance.  I managed to attend three of those conferences. In an era of unprecedented attacks on the bail industry, a vital and effective component of the criminal justice system, the level of optimism among the conference attendees was palpable and refreshing.

The 2021 American Bail Coalition Agent Conference held at the Gaylord Opryland Resort in Nashville, TN September 28-30, was a breath of fresh air.  If you were able to avoid getting lost in the maze of gardens at this giant hotel and make it to the meeting room, you would have received a wealth of information about the bail industry.  There was an outstanding slate of speakers who spoke of the ill effects of over-reaching bail reform and the successful efforts to stymie, kill or reverse those reforms.

My next stop was San Antonio, TX where I attended the 51st Annual Convention of the Professional Bondsman of Texas held October 6-8. Like the ABC conference, the attendance was maxed out.  The energy was high because the future looks promising for the bail agents of Texas.  The Texas legislature had recently enacted SB 6 which, in part, placed prohibitors on releasing defendants on an unsecured personal recognizance bond.   This new law will have a profound impact on the liberal release policies currently in place in Austin, El Paso and Houston.

One example of a PR prohibitor would be, any defendant currently out on bond charged with a new felony crime or charged with an offense involving assault, deadly conduct or terroristic threats is not eligible for a release on PR bond.  SB6 also included regulation on charitable bail funds.  These unregulated groups must now be certified by the local sheriff to post bail in a specific county and, submit monthly reports listing those defendants for whom they posted cash bail.

Last week, I returned from beautiful Southern California where I attended the California Bail Agents Association 42nd Annual Conference held October 10-12, in Alpine, CA.  Other than forgetting to make a reservation at the sold-out Viejas Casino & Resort, it was a memorable stay.

Like Texas, the California bail industry also had an eventful legislation season.  California operators coming together again to stop the passing of SB 262, a measure that was aimed at killing an industry and releasing thousands of criminal offenders back into society unsupervised.  While SB 262 lacked the support in the General Assembly to pass in 2021, it will be brought back in 2022 as a two-year bill and that battle will continue.

The CBAA conference yielded a lot of useful information coming from a great line-up of guest speakers.  Longtime CBAA President Gloria Mitchell of Pomona, CA, announced she would not be running for re-election.  I’ve had the pleasure of knowing Gloria for nearly 20 years.  She is always the first one in line to volunteer for any effort to protect and preserve the bail industry.  Thank you, Gloria for your hard work and dedication!

I really can’t help it I love attending these conferences and being around my fellow bail agents.  They are a good hearted, generous, and hard-working group.  They understand and appreciate their role in the criminal justice system and take their jobs very seriously.  I was honored to make a presentation at all three of these conferences along with Eric Granof of AIA.   Eric and I may represent different surety companies but we both enjoy bringing new information and perhaps a few laughs to the conference attendees.

If you are a bail agent writing anywhere in the United States, there is plenty of reason for optimism.  Common sense is making a comeback and our elected leaders, law enforcement and citizenry are beginning to understand the direct correlation between releasing offenders on low or no bail and the significant increase in crime.  Granting those charged with a crime due process and setting appropriate yet reasonable bail to assure offenders appear for trial, will go a long way in rolling back the crime wave and making our communities safer.  Join the American Bail Coalition and your state association and take part in the preservation of your profession.  Together we can get this done.