11Sep 2019 by Michael Whitlock No Comments
By Michael J. Whitlock
I’m a Baby Boomer, so they tell me. I was born in 1963, eight months before John F. Kennedy was assassinated and a week after they 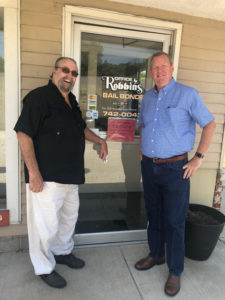 Mike Whitlock with veteran Indiana Bail Agent Terry Robbins at his office in Lafayette, IN

shuttered Alcatraz Federal Penitentiary. It would be 19 years before I would get my first job in bail running bonds for a Dallas bonding company, I had no idea at the time the bail industry would be my profession for the next 37 years and counting.

When I moved to Indianapolis as an employee of Allied Fidelity, it provided an opportunity to learn more about the surety company-bail agent relationship from experienced veterans. I was eager to expand my knowledge of securing collateral, underwriting large bonds, forfeiture management and auditing bonding agencies. I would come to learn about contracts, marketing, agent recruiting and negotiating surety contracts.
There came a time when I wanted to become more active in efforts to protect and preserve the bail industry. Learn about the legislative process and take action to promote the bail industry’s critical role in the criminal justice system. I published newsletters, began speaking to various groups and associations and testifying in legislative committee hearings. I was open to any opportunity to tout our industry message, bail bonds were vital to pretrial justice.
I did not gain knowledge out of thin air, I received guidance from mentors and veterans such as my father Jack Whitlock and Bill Carmichael who I have known for 35 years. There are many bail agents and surety representatives from around the country who I’ve gleaned much information. I felt an innate responsibility to do my part as the next generation and start assuming some of the responsibility that had been shouldered by those veterans that came before me.
It’s now time for bail agents and surety reps in the Gen X, Y & Z eras to start working their way into leadership positions and volunteering for committee assignments with their state and national associations. Participate in legislative efforts, advocating for the bail industry. I know many already have but more are needed.
While overreaching bail reform and criminal justice reform overall, have caused some trepidation among the professionals in the bail industry, the use of bail bonds is still a large component of the pretrial release systems across the country. Bail bonds will continue to have a place in the criminal justice system and therefore so will you.
There are several state association meetings on the fall calendar, California, Idaho, Texas, Ohio, Tennessee and Washington State. Not to mention, the 2019 ABAC Conference in Las Vegas. These meetings provide a great opportunity for Xennials, Millennials and even Gen Zs to get involved with efforts to shepherd the bail profession into the future.
As a Baby Boomer, I couldn’t wait for the chance to offer my opinion and perspective to those who would listen. Once given the opportunity, I never looked back. I’ve been doing this for several decades and still do so today and enjoy every bit of it. The bail industry is beginning to see a lot of our experienced veterans slow down or step away. There is no time like the present for up and coming talented bail agents to step up, so step up.