09Jun 2022 by Michael Whitlock No Comments

Riding up the elevator this morning in our Indianapolis office, a nice lady commented she had not seen anyone in a coat and tie for a sometime, even pre-pandemic. I replied, I was among the holdouts not willing to give way to latest trends quite yet. There is one trend I gave up on before it really got going; criminal justice reforms, specifically bail reforms. Reforms that attempted to do away with personal accountability, go lightly on criminal offenders and disregard victims of crime.

This trend is nearing its predictable demise as the general law-abiding public has been awoken to the adverse impact these problematic reforms have had on their everyday lives. They do not feel safe in their own communities due to the lawlessness and soft on crime policies. Bad behavior begets more bad behavior when gone unpunished. San Francisco DA Chesa Boudin found out just how angry his constituents were when they recalled him earlier this week due to his offender friendly policies. Bye-bye.

I recently provided testimony in Ohio in opposition to HB 315, legislation that would have reworked the current bail system in The Buckeye State to the detriment of public safety. Fortunately, that bill failed to pass.

The Hawaii State Legislature recently sent HB 1567 to the governor for his signature. This bill, if signed, would eliminate the use of bail in favor of release on own recognizance. Ironically, when the bill sponsor heard the outrage his bill would have on public safety he asked Gov. David Ige to veto his own bill. The mayors of Maui, Hawaii island, Honolulu and various other officials have made their own pleas to the governor to veto HB 1567. 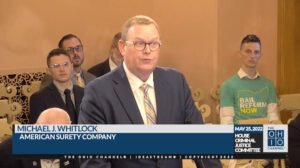 Harris County, Houston, Texas is still trying to find their way after implementing a policy of releasing nearly every misdemeanor offender on their own recognizance. A recent study released by the Houston Police Officer’s Union found Harris County’s 16 misdemeanor courts had an average failure to appear rate of 76.09% which means some courts had an even higher FTA rate. When the exception is that someone appears for court, it is clear the Harris County misdemeanor courts have lost all credibility and influence. It will take years to rebuild this corner of the justice system.

While folks in Harris County, Texas are still trying to admit to themselves their reforms have failed even beyond expectations, other states like Ohio, New York, Utah and yes, Texas with recent state legislation have started to reform some of the ill-advised reforms put in place in recent years. This could not have been achieved without the work of state bail associations and American Bail Coalition. American Surety Company spends hundreds of thousands of dollars each year towards the costs of preserving the constitutional right to bail. The most affordable and least restrictive form of release guaranteeing appearance is still a bail bond, and that is no trend but a staple of the criminal justice system.