10Oct 2011 by tkanger
Bail agents of The Buckeye State met in Columbus on September 22-24 for the 6th Annual Meeting of the Ohio Bail Agents Association. The OBAA has been quietly trying to improve conditions for commercial bail in that state. 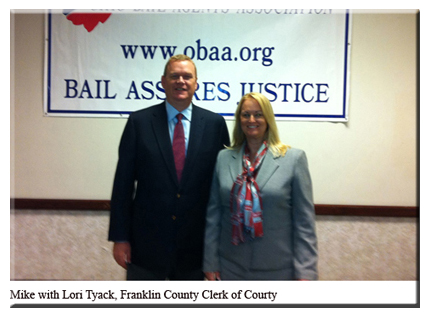 Senator Bill Seitz was on hand to speak about his 309 page Sentence Bill (HB 86) which became effective September 27. The bill includes an amendment from the bail industry which provides for the clerk to mail a notice to the surety within 15 days after the declaration of the forfeiture. The show cause period has also been increased from a minimum of 20 days to 45 days.
Senator Seitz is an enthusiastic and loyal supporter of commercial bail and the role it plays in the criminal justice system. Senator Seitz fought hard to include the bail amendment to HB 86. He also committed to incorporating a post conviction bond in legislation he will introduce next year that he calls the Son of HB 86.
Franklin County Municipal Clerk of Court Lori Tyack was also an invited speaker. After hearing her position on deposit bail, the Ohio bail industry can now count Ms. Tyack as a friend in addition to Senator Seitz and Judge Nancy Russo of Cuyahoga County. Ms. Tyack is one of only a handful of Court Clerks in Ohio who are elected as opposed to appointed. She is also the President of the Ohio Clerk’s Association and has invited OBAA members to attend their October meeting and have a booth in their vendor section.
Finally, there was some discussion on the suit brought against an Ohio court clerk who had denied a bondsman from posting a bail bond on a 10% deposit. The Ohio Court of Appeals ruled in favor of the bail agent and directed the court clerk to accept the bond.
The use of deposit bail as an option to a fully secured bail bond is spreading in Ohio. The courts are mesmerized by the cash and quickly forget about the purpose of bail. It will take a continued effort by the bail industry to bring the courts back around to reality.