This past October, I was a guest speaker at the California Bail Agents Association annual conference in Las Vegas. My topic was the recent legislation passed in Indiana regulating charitable bail organizations. My preferred speaking style is from the heart, not power point presentations. Albert Ramirez, a veteran bail agent and attorney came up to me afterwards, gave me some positive feedback and ask where I went to college. I told him, no college for me. He said I came across as having advance educated in my presentation. That was the greatest compliment I could receive.

A lack of a college degree, or any college at all, has been the driving force in my work life, if I am being honest. Everyone around me had a degree: my father Jack Whitlock went to Missouri; Bill Carmichael went to Notre Dame; Gary Logue went to Purdue; and P.J. Longstreth, who came on board at ASC in the year 2000, has a degree from Butler University. 18 years after I entered the bail bond business, I was still trying to prove myself worthy of the position I 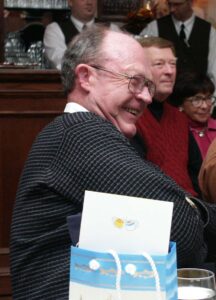 Jack at his retirement party.

had at American Surety Company. It drove me then and still drives me today.

After nearly two decades working in this business, I had become a jack of all trades and master of none. That is, if I just wrote bail in Indiana, I would be intimately familiar with the state laws and regulations, the court system, and surroundings. As it was, my territory was the United States, and every state has a different set of rules governing bail and collateral. In California, you had 180 days to return to court. a defendant who failed to appear. Other states ranged from10 days to one year. Texas used a Deed of Trust and Real Estate lien note to secure property whereas Indiana, Ohio, and Michigan used mortgage forms. In Colorado, you’d better have the original promissory note when you go to release a lien, or you will have problems. At any point in time, I needed to keep all of this information in my brain. Over time I gained a breadth of knowledge on bail-related concerns in most of the states in the country, which I suppose was and still is my expertise.

The morning of September 11, 2001, I made my way into our office on Vincennes Street on the northside of Indianapolis. I was at my desk early that Tuesday morning with a small TV on in the background, when I heard someone on the Today Show reporting about a small plane that just hit the World Trade Center. I called over to Kathy Boyer, Jack, and Bill’s executive assistant to come check out the report. Less than 10 minutes later, we watched together as the second plane hit the towers on live TV. “That’s no small plane,” I said. The United States had just been attacked; it was surreal.  Who attacked us? How would the U.S. respond? Were we going to war? There was not a plane in the sky for the next several days, only serving to underscore our nation’s situation. The air of uncertainty and angst was palpable.

Even in the wake of an historic terrorist attack on our country and the tremendous loss of life, life must go on. President Bush told America to go about our business as normal, so we did. Regular business would resume at American Surety Company. We continued to sign new bail agents around the country as ASC was admitted to more and more states.

In 2002, my time managing the Underwriting and Claims Departments, which I ran for 14 and 9 years, respectively, would come to an end. With a new title of Vice President, I would focus 100 percent of my time on marketing, recruiting, and agent relations. This was a shock to my system as someone who liked to keep a finger in every pot. I did not appreciate it at the time, but I was being groomed to take over Jack’s role with the company when he decided to retire. That day came in 2004. Jack must have believed he taught me everything I needed to know; otherwise, he would not have felt comfortable taking his leave.

Jack had a remarkable career over the forty years he worked in bail; first as a retail bail agent in Kansas City and Memphis and then as a general agent, then as Vice President of the bail division at Allied Fidelity and then co-owning American Surety Company. Jack was also a founding member of the Professional Bondsmen of the United States (NBC) and Chair of the National Association of Bail Insurance Companies (NABIC) and past Chair of the American Bail Coalition (ABC). In retirement, Jack traveled the world with his wife, Annette, and played a lot of golf. I still seek advice and council from my dad and keep him updated on industry news—not unlike Michael Corleone did for Vito. I credit everything I am today to my dad.

Bill Carmichael took over as President and CEO of American Surety Company and he gave me the keys to dad’s office telling me I was replacing Jack as the face of the company. Let’s just say, I embraced that with both arms. After all the years of hard work it was time to step out of my dad’s shadow. Exciting times ahead. 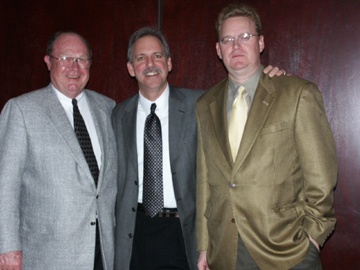