17Aug 2022 by Michael Whitlock No Comments

The late eighties and early nineties would serve up good and bad, profit and loss.  During that time I was on the ground floor of a new startup, and I would get married, lose a brother and a father-in-law, see our first child born, and start a charity. It was a time of great change, both for better and for worse.

One of the great things that happened is meeting and marrying the love of my life. My wife Marcia and I first met while working at Allied Fidelity. We married in 1988, and our first child came in 1992.  Marcia and I celebrated our thirty-fourth wedding anniversary earlier this year.  Anyone working in the bail profession can tell you, it can be hard on a marriage. The phone rings at all hours and interrupts every occasion: birthdays, holidays, and date nights. Your spouse must put up with a lot and some elect not to do so. We have had our challenges, but I have been extremely fortunate to have 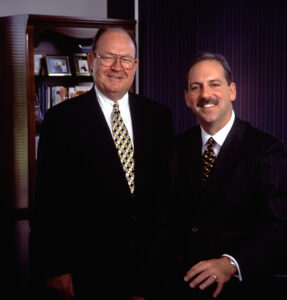 a wife who has stood by me. But I digress.

Underwriters Surety, Inc. had been operational for 18 months in the spring of 1988.  New agents were coming on board every week and production was climbing; I was managing the Underwriting Department. Marcia and I were preparing for an April wedding. My twin brother Steve would serve as my best man. The wedding was unforgettable.  My personal life was great, and my work life was clicking.

A month after our wedding, my mother, Annette, who was working in the office preparing contracts and appointing agents, walked into my office to share some alarming news. My brother Steve had been admitted to a Dallas hospital after being diagnosed with brain cancer. It was a glioblastoma located in his brain stem. About as bad as it gets.  My dad was traveling at the time.  He was pulled off a plane and told the news before he caught a flight to Dallas.

Steve endured all the treatments, chemotherapy, radiation and even a trial treatment to no avail.  He died June 28, 1989, at the age of twenty-six, thirteen months after first being diagnosed. It was a grim time for the entire family, especially my parents. No one should ever have to lose a child.   A month later Marcia would receive word her dad had died suddenly at the age of 47.  We would attend two funerals in a span of thirty days. Marcia and I did the best we could in the wake of such profound personal loss.

Soon after Steve’s passing, I wanted to do something for charity in his memory. With the help of Marcia and my family, I started the Steven G. Whitlock Memorial Golf Tournament. We raised $1,800 in our first outing in the fall of 1989.  We selected Camp Esperanza as a beneficiary of our fundraising.  Camp Esperanza is an annual summer camp for pediatric cancer patients.  In time SGW would soon receive support from the bail industry, bail agents, surety companies, The Professional Bondsmen of Texas and of course, American Surety Company.  Together we would raise more than $550,000 for Camp Esperanza over thirty years.  It was a blessing to honor Steve’s memory by helping courageous kids cope with their personal fight.

In the wake of a loss, one must keep moving. I buried myself in work and family – there was a lot to keep me busy.  I would arrive to work early, stay late, worked weekends, and split on-call duties with Gary Logue, who was hired in March 1990. He is still with the company today. By 1992, I was managing both the Claims and Underwriting Departments.  I was traveling more frequently, conducting agency audits, attending bail agent conferences and trying to be the best father I could to our son Nathan.  My plate was full.

In the ten years since I first walked into the office of Guarantee Bail Bonds in Dallas, I had yet to really contemplate the bail agent’s role within the criminal justice system and an offender’s constitutional right to be released on bail pending trial. But in 1991 or 1992, the Arkansas State Legislature passed a bill that eliminated the corporate surety bail licensee. It was then that I first became aware of how politics can play a critical role in our business. The Arkansas coup awoke the entire industry and soon thereafter the National Association of Bail Insurance Companies (NABIC) was founded.  Jack Whitlock would serve as its first Chairman.

Meanwhile, things at USI were continuing to evolve as the company grew. USI initially received backing from Indiana Lumbermens Mutual Insurance Company when it opened in 1986, and then moved over to National American Insurance Company a few years later. While these were mutually beneficial relationships, Jack and Bill were not content with placing business through other surety companies. Buying an insurance company was the next logical step. The company they would eventually purchase held a license in one state, California.  Its name, American Surety Company.