I traveled to the gulf shore early this week to attend the PBUS 2016 Mid-Year Meeting in Biloxi.  PBUS President Beth Chapman and 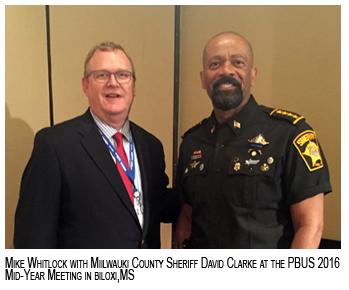 her board of directors produced one of the more informational meetings I’ve attended for the national association.  The lineup of speakers was first rate and the reports on the commercial bail industry’s efforts to derail criminal welfare was detailed and illuminating.

Milwaukee County Sheriff David E. Clarke, Jr. was the Keynote speaker Monday night.  Although Sheriff Clarke’s home state of Wisconsin has not benefited from the use of commercial bail since 1978, he did voice his support for returning the most effective form of pretrial release to The Badger State.

After listening to Sheriff Clarke’s speech the gentlemen I was seated next to ask me what my elevator speech was on the need for commercial bail.  Even though I had made this argument hundreds of times I wasn’t prepared for the question and I stumbled on my answer.  Having been up for 15 hours and in a relaxed state of mine was no excuse for not being able to provide an immediate response to that question as if drawing a gun from a holster.  Here is what I should have said.

Commercial bail is the lynchpin of the criminal justice system.  I believe the system of bail is in place not for the accused as much as it is for victims, society and the interest of justice.  While mistakes happen, the impetus for an arrest is probable cause and therefore on its face, justified.  The accused has a right to reasonable bail if a capital offense was not committed.  Society has a right to know the accused will appear for trial.  The most effective means to insure the accused appears for trial is a fully guaranteed bail bond backed by an admitted surety company and executed by a licensed bail agent.  Unsecured release does not offer a guarantee and are akin to an air sandwich.  Only commercial bail bonds guarantee the production of the accused in court or payment of the bail amount when an offender cannot be produced.

I read an article on bail in the Huffington Post today.  They spoke of commercial bail only being legal in the Philippines and the United States, as if that was a bad thing.  If asked to defend this perceived rarity I would say, I don’t know anything about the Philippines but the requirement or the entitlement, depending on your perspective, of bail was made a part of the U.S. Constitution through the Eighth Amendment.  Anyone seeking to move to the United States must respect our Constitution; otherwise, they should just stay home.