How was your Christmas?  Mine was good.  It was spent with family.  My wife gave me a Go Pro.  An interestingchoice for me.  On occasion when leaving the house I would say I was going base jumping.  I didn’t think she took me seriously.  I am looking forward to getting some fast action video on the golf course this 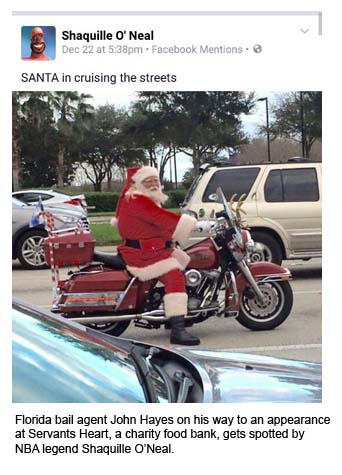 Speaking of interesting choices have you been reading about the lawsuit filed in San Francisco by a couple of Harvard Boys?  Seems they want to get rid of the bail schedule.  They say it’s unfair to the poor and unconstitutional.  Their true goal is to release all criminal offenders without requiring any bail to guarantee appearance.  Clearly, increasing public safety and personal accountability is not one of their New Year’s Resolutions.

Even though lawyers for both the City of San Francisco and the State of California have filed motions to dismiss this lawsuit, bail agents are still concerned about the impact this suit would have if the Harvard Boys prevail.  The concern is legitimate.  It is possible a federal judge could disregard the motions to dismiss the constitution and the efficacy of bail and rule in favor of the plaintiffs, but I don’t think so.

Every year millions of defendants are released from jail pending trial with their appearance in court guaranteed by a bail bond backed by a surety company and supervised by a licensed bail agent.  Only a fraction of these defendants never appear for court.  That’s not dumb luck; that’s the effectiveness of the bail bond system the Harvard Boys seek to eliminate.

Bail schedules serve a purpose.  They keep the criminal justice system moving.  Someone arrested for DUI, aggravated assault, auto theft and the like have preset bail amounts which permit a secured release from jail soon after they are arrested.  The law says someone charged with a crime is innocent until proven guilty.  They have a constitutional right to reasonable bail.  Society has the right to see criminal offenders appear for trial and the case adjudicated.  Only bail bonds offer this assurance.

Doing away with a preset bail schedule would result in defendants waiting days and weeks before receiving a bail hearing before a judge.  The system would grind to a halt as there would be no space in the jail to house new arrestees arriving daily.  As a result local law enforcement would be forced to reduce arrests thereby permitting an inevitable increase in crime.

If the Harvard Boys are worried about a criminal offender’s inability to make bail they shouldn’t.  A truly indigent non-violent offender with no prior criminal history is a candidate for release on their own recognizance.  Perhaps the Harvard Boys could focus their attention on ways to reduce crime.  That is something we can all get behind.

Bail agents, please do not enter the New Year with overwhelming dread and concern for your livelihood.  The California Bail Agents Association and The American Bail Coalition are on the case.  It is always in your best interest to support these associations and your state association who tirelessly work to preserve the commercial bail industry.

Here is wishing everyone a safe and prosperous New Year!  As for me, I’m going base jumping.