20Jul 2022 by Michael Whitlock 6 Comments
Michael J. Whitlock
Executive Vice President
This year, I entered my fortieth year working in the bail profession. I have been a surety representative for most of that time, but I started out working in what would become a career in a bail bond office on Commerce Street in downtown Dallas in 1982. Just over two decades later I would inherit my father Jack Whitlock’s office and desk, when he hung 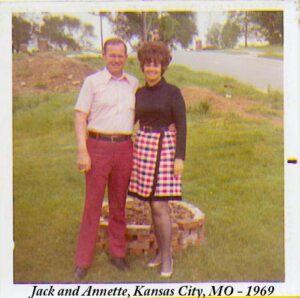 up his spurs in 2004. I would become one of three owners of American Surety Company just six years later. Fast forward to 2022, I am still sitting at the same desk, in a different office, contracting bail agents, traveling the country meeting with ASC agents, attending conferences, and working with the American Bail Coalition to preserve the right to bail. I have made lifelong friends during this time. Life has been good.
Jack acquired his desk new in 1987, a few months after starting Underwriters Surety, Inc., with his longtime partner and our current CEO, Bill Carmichael. For the next 15 years I would watch my dad underwrite large bonds, negotiate bail contracts, and lecture me more times than I can count, from behind that desk. He was and still is someone to be respected and admired. I continue to learn from him to this day.
Jack was born in Columbia, MO, graduating from the University of Missouri in 1959. After graduation, he moved to Kansas City where he took a position selling grain bins and metal buildings. By 1963 he was married with five kids under five years old, my older sister Debbie, brother Mark, sister Cheryl and my twin brother Steve and me. With so many mouths to feed, my dad took a better paying job at Allstate as a claims adjuster, eventually moving into a sales position where he remained for the next eight years.
Like most people working in the bail profession, Jack backed into it. My mother, Annette had worked at law firm. She had a co-worker whose husband was a bail agent. He approached my dad about being a posting agent, dad held a P&C license, required to write bail in Missouri at that time. It was an easy decision, another opportunity to increase his income so he could take care of his ever-growing family.
In 1973, dad moved to Memphis, with my mom and now seven kids, adding younger brothers John and Chris, to enter the bail bond business full time. He would own and operate Allied Bonding for the next four years. Memphis was a wonderful place to live as a kid growing up in the suburbs, playing soccer and attending Catholic school. It is my first memory of going to the bond office with my dad on Saturday mornings.
There were a few tell-tale signs my dad’s work was cool. He had a black office phone with the push button lights, he kept on the lamp table next to his easy chair. He had a car phone in his Cadillac, and he would leave the house at all hours wearing his silk print shirts, popular at the time. The work schedule he kept did come at a price which I would come to appreciate many years later and that was time away from family. He would regularly pick me up late from soccer practice and miss a lot of my games. He would work very odd hours and weekends. It was common for him to leave the house during special occasions after the phone rang. I really did not take too much notice at the time; I had my mother and six siblings to keep me company. Mom did wield “wait until your father gets home” as a hammer when my brothers and I would misbehave, which was often. This exclamation would put the fear of God into us.
During the US Bicentennial, in 1976, we packed up the Chevy conversation van and moved to Enid, OK, where dad had an opportunity to become a partner in a general agency. Enid had a population of about 45,000 at that time and quite a departure from Memphis. I got my first job working at a Sonic Drive-In at age 13. Using the money I earned, I made my first big purchase, a blue Schwinn ten-speed bike which I would ride downtown to visit my dad at his office after my shift. I recall, several people working in the office and a lot of filing cabinets. The general agency worked with bail agents in multiple states, so the staff was quite busy. My sister Cheryl also worked in that office.
We did not stay long in Oklahoma, in 1979 we moved south to Dallas, TX, where Jack would operate a large bonding company while still managing independent agents throughout the south. Randy Adler and Carl Pruett, people familiar to the Texas bonding community, worked at this bonding company while attending law school. They are both still active in the industry today.

During this time, I would attend junior high before graduating from Plano Senior High School in 1981. To earn money, I worked for a variety of fast-food chains, and tried my hand at construction and landscaping during those hot Texas summers, not for me. One night in late December 1981, I got a call from my older brother Mark, who was working for a bonding company downtown; do you want to post some bail bonds for me?

6 thoughts on “Four Decades in Bail – Part One”