24Nov 2021 by Michael Whitlock No Comments 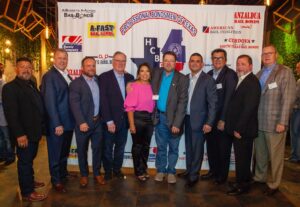 Typically, at the end of each calendar year I’m a bit worn out from travel.  After being grounded in 2020, I was back on the road at my standard clip in 2021.  Yet even after 120 flights and 125,000 air miles, I feel rather refreshed.  Part of the reason may be, getting out to see the great people in the bail industry that I have come to know over the years.  Perhaps it’s the fact everyday people are starting to be heard on how the sharp increase in crime is negatively impacting public safety.  Or it could be witnessing the good work of associations like the Hidalgo County Bail Bond Association (HCBBA) is doing in South Texas.

I’ve recognized the HCBAA, their president Rene Anzaldua and Board of Directors in previous posts for their efforts.  Taking an interest in your local community and maintaining good relationships and open communications with local officials is essential to any effective association regardless of your profession.

American Surety Company was proud to sponsor the 4th Annual Hidalgo County Bail Bond Association Mixer held November 17, 2021, in McAllen, TX.   Fortunately, I was able to attend this event to witness the great things happening with the HCBAA.  The mixer hosted around 150 guests that included state senators, state representatives, judges, and county commissioners.  Several board members from the Professional Bondsmen of Texas were also in attendance.  The mixer was as impressive as any bail industry function I have ever attended.

It was about four years ago incoming HCBAA President Rene Anzaldua and board members Rene Ortega, Jr. Irma Vega-Montemayor, Aaron Garcia and Javier Morales made a commitment to engage on a regular basis those elected officials who hold sway over their profession.  The primary goal was to educate these officials about the critical role bail agents have within the criminal justice system.  According to Rene Anzaldua, “the efforts of HCBAA, has had a positive impact on all bonding companies operating in Hidalgo County and our elected officials have developed a new level of understanding and appreciation for bail agents who ensure offenders appear for trial.

Congratulations to the HCBAA and its members for their continued effort to bring awareness to the beneficial impact the bail industry can have on ensuring a safer community.  On behalf of American Surety Company, I want to wish everyone a safe and special Thanksgiving Day.