If you were unable to attend the 7th Annual ABC Agent Conference in Las Vegas last week, that sucks for you, because it was the best one yet. A primary characteristic of an ABC conference is, no fuss no muss. A cocktail party on the eve of the conference followed by one day of all business. Information comes at you like a fire hose and then you go on with your life much more informed.

This year’s event was especially enlightening because it was by all accounts a good year for the bail industry. Another effort 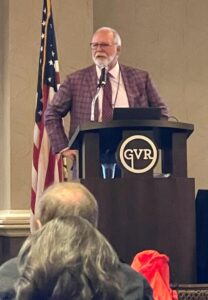 to put the bail industry out of business in California failed by a wide margin. Ohio voters said yes to considering seriousness of offense, criminal history and likelihood of appearance, when setting bail. Hawaii, passed a soft on crime bail measure only to have the bill’s author ask the governor to veto his own bill; the governor obliged. And, Indiana passed legislation regulating charitable bail organizations, a model for the rest of the country.

ABC Executive Director Jeff Clayton, went into detail on these victories and so much more. Conversely, he took the attendees through what the upcoming legislative session will look like given the results of the 2022 mid-term elections. Michigan may prove problematic with the Democratic party winning majorities in the house and senate. Republican candidate Lee Zeldin lost his bid for governor in New York. Zeldin was calling for a retraction of the Empire State’s overreaching bail reform. New Yorkers may continue to suffer from lenient bail policies, as a result.

I never said it would all be gold. You win some you lose some but we keep fighting to preserve the constitutional right to bail and a defendant’s right how they choose to secure their bail, be it cash or a bail bond.

The conference included some interesting guest speakers. Sacramento County Sheriff Jim Cooper, who as a legislator, championed bail in California. Then there was former Acting Attorney General Matthew Whitaker and U.S. Congressman Troy Nehls (R-TX-22) who recounted events of January 6, when he was the last legislator to leave the House chamber.

Bail agents have plenty of opportunities to attend various industry conferences throughout the year but you will want to put the 8th Annual ABC Agent Conference on your 2023 calendar. If it’s half as good as this year’s event the house will be a rocking.

Note – I’ve been asked when the next installment of My Life in Bail will be published. I had to put my story on hold as I’ve been traveling the last several weeks attending conferences and visiting American Surety Company agents around the county. I can’t wait to write the next chapter and it will be out soon. It’s in my head, just need to put it on paper.