03Jan 2020 by Michael Whitlock No Comments

Indiana Fraternal Order of Police President Rick Snyder held a news conference yesterday in Indianapolis to discuss his #WheresTheOutrage initiative and Indy’s “local broken system of catch and release.”  Violence has been on the rise in the Circle City for the last several months.  Just this morning, Rick Snyder tweeted, “ANOTHER person shot overnight in Indy brings city to 112 people shot, 44 stabbed and 28 killed in last 56 days. That’s 156 shot or stabbed!”

In his presser, Mr. Snyder decried the fact repeat violent offenders were regularly being released from jail on $500 cash bonds with an ankle monitor.  That when the offender cuts off the monitor, they are arrested, charged with escape and re-released on a $500 bond with an ankle monitor, “how does this make sense to any 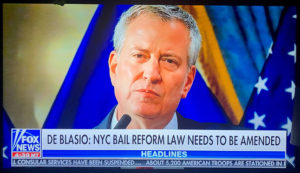 Mr. Snyder went on to complain about Indiana’s policy of housing state inmates in county jails, a practice we are seeing in other states like California.  All in the name of saving money.  Marion County jails are housing 350 state inmates at any given time according to Snyder.  With so many beds being taken by state inmates, judges have little choice but to release pretrial detainees as quickly as possible which only adds to the increase in crime as these offenders are released back into local communities unsupervised.

Let’s face it, while those of us working within the criminal justice system universe, have been well aware of nationwide efforts to expand catch and release programs, the law-abiding public has been under informed on the issue.  Now that this soft-on-crime issue has been implemented in New York State, the U.S.’s largest media market, hopefully, the public will become more informed and outraged at these catch and release policies.  Enough so, to call upon civic leaders and legislators to re-evaluate their ill-advised decision and make things right in the best interest of victims of crime and public safety.

Looking ahead in 2020, perhaps this is the year overreaching reforms to bail policies will finally come to an end.  The bail industry has conceded some reforms are needed in the area of due process on bail decisions; every arrestee deserves to receive a timely hearing if they are unable to make bail.  We have never supported the concept of releasing repeat offenders back into communities with no bail requirement and therefore no guarantee of appearance.  While some in the media may be surprised at the results of these policies, the bail industry saw it coming