30May 2019 by Michael Whitlock No Comments 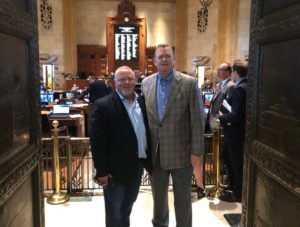 With Shawn Hulin at the State Capitol in Baton Rouge, Louisiana.

Since I last posted a blog in March, I’ve traveled all over the country. I’ve spent time in New York, California, Colorado, Connecticut, Georgia, Louisiana, Texas (twice) and Washington State. It was a mixture of visiting American Surety Company agent-partners, attending state association meetings and working on behalf of the American Bail Coalition.

At every stop, the topic of discussion was the push for criminal justice reform and how it would impact the use of commercial bail, or “cash bail” as some like to call it. While it is true, California passed SB 10 in 2018 and New York’s Governor Andrew Cuomo signed a budget last month that included granting OR release to misdemeanor and felony offenders, by and large efforts to eliminate the use of bail failed thus far in the 2019 legislative season.
After a huge effort by the bail industry in Colorado, legislative proponents failed to pass HB19-1226. This measure, if passed, would have created a statewide pretrial release system similar to the failed system currently employed by the State of New Jersey.
Senate Bill 252 in Oklahoma failed to pass last week after a major legislative battle that included sheriffs and prosecutors coming out against the offender-friendly legislation. While ABC played a peripheral role in lobbying against SB 252, the Oklahoma Bondsmen Association did all the heavy lifting in seeing the industry killing legislation defeated.
Further to the south in Texas, bail agents in the Lone Star State had their own fight for survival, with HB 2020 being considered. After several weeks of debate the 86th Legislative Session closed without passing any meaningful bail reform legislation.
The PBT Legislative Team practically lived in Austin since the beginning of the session, volunteering their time and resources. They did a tremendous job educating legislators on the failings of risk assessment schemes and the benefits of continuing the time tested commercial bail system. Their efforts paid off and the legislative measures were defeated.
In addition to Colorado, Oklahoma and Texas, significant efforts were made by ABC and the respective state bail agent associations to avert ideological reform efforts in Florida, Georgia, Idaho, Iowa, Kansas, Minnesota, Virginia, West Virginia and Washington State. While efforts continue in Connecticut, Louisiana, Michigan and North Carolina as those legislative sessions remain active.
Most of the agents I speak with around the country are amenable to reasonable reforms within the criminal justice system. Simply eliminating a monetary system of bail that has worked for generations and continues to work today, is not a reform they are willing to concede. Keep up the good work everyone and we will see this through to the other side.