22May 2012 by tkanger
After a three week lull in travel in early April, I was off and running again with trips to Texas, California, Georgia and Tennessee.  Amid my travels I tried to keep abreast of critical legislative events occurring in Alabama, California, Colorado, Louisiana and Missouri. 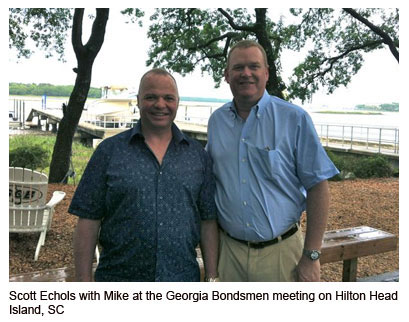 Alabama bondsmen tried in vain to defeat the implementation of an oppressive $35 bond fee while California bail groups make their opposition known on the Hancock bill (SB1180) that provides the first option of release to be on one’s own recognizance. We can trust them, right?
Over in Colorado there was a harmony of efforts to continue the authority of the Division of Insurance to regulate bail through 2017. It appears all interested parties walked away happy though not fully satisfied. That’s when you know it’s the best you’re going to get.
The commercial bail community in Louisiana has its hands full curtailing the expansion of ten percent cash bail and the encroachment of taxpayer funded pretrial release. Then there is the Show Me State whose bail agents are supporting the passing of a measure that says, Missouri courts cannot set a cash-only bond. BTW, this is already provided for in that state’s constitution. See Article One, Section 20.
As always, you only need click on our 2012 Bail Bond Legislative Update to review bills from these states and others across the county to see what legislative measures can impact bail in your market.
On the travel schedule, next month I’ll be a guest instructor at a continuing education class presented by the Oklahoma Bondsman Association speaking about public pretrial release programs. From there I’m scheduled to attend FSAA’s 40th Anniversary Celebration in Cocoa Beach, PBUS Mid-Year Meeting in San Diego, the MBAA General Assembly Meeting in Bay St. Louis and the PBT 3rd Quarter Meeting in Ft. Worth. The PBT meeting coincides with the 23rd Annual Steven G. Whitlock Memorial Golf Tournament August 1st, where we anticipate raising a significant donation, with tremendous help from generous bail agents to underwrite the costs of sending as many as 85 kids who are battling cancer to Camp Esperanza. This is a day I look forward to every year.
All bail agents should support their state and national associations with their time and money.  Without these valuable entities the commercial bail industry would be defenseless against those who seek to eliminate our profession and replace bail with yes, an air sandwich.

That’s all for today, I have to get downtown for Indiana’s spring meeting of bail agents. It’s going to be a blockbuster.