30Sep 2010 by tkanger
Another hearing on reinstating commercial bail in Oregon and a WSBAA meeting in Fife, Washington put me in the Upper Northwest last week.
The American Bail Coalition is in its third year of an effort to bring commercial bail back to Oregon, after nearly forty years, offering an additional release option to judges interested in guaranteeing a defendant returns for trial.
Jerry Watson testified before a joint committee on September 22 at the State Capitol in Salem. As expected, he did an excellent job articulating the merits of commercial bail and its positive impact both from a fiscal and public safety standpoint.
The bill draft is currently in the hands of Legislative Counsel and yet to be filed. This being the case, Committee Co-Chairs Barker and Prozanski were taken aback when Sheriff Todd Anderson, representing the Sheriffs Association and Scott Taylor, head of Multnomah County Pretrial Services, testified in opposition to a bill that had not yet been filed. Anderson and Taylor were both caught flat footed when asked if they were aware the intent of the draft bill was to reintroduce commercial bail as a release option for judges, not to replace pretrial services or the deposit bail system. Did they have a problem with judges having more release options at their disposal? (crickets)
Little patience will be granted to any state agency standing in opposition to the reinstatement of commercial bail who has not had a representative present at one of the many working group sessions taking place the last 24 months.   The working group has been the established venue for voices, objections and concerns.
Oregon has a major failure to appear problem with thousands upon thousands of outstanding warrants. Bringing back commercial bail is intended to help with both of these problem areas while at the same time bringing additional revenue to the state in the form of premium taxes and bond forfeiture revenue.
Stay tuned to WIWMW for further developments.
WSBAA Meeting
The Washington State Bail Agents Association held its 2010 Fall Conference at the Emerald Queen Hotel in Fife, just outside of Tacoma, September 23. The meeting was well attended with several speakers addressing the membership. 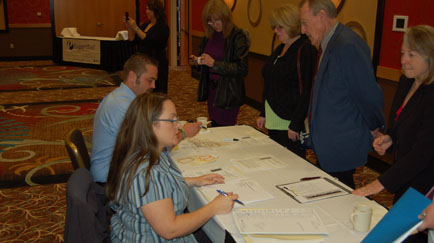 I was asked to speak on the issue of national bail related events after a scheduled speaker had to cancel (I never turn down an opportunity to speak about bail). I updated the membership on the progress being made in Oregon and successful legislative efforts occurring in 2010, as there were several.
WSBAA has been dealing with the fallout of the Clemmons shooting where four Lakewood police officers were murdered. The legislature is conducting hearings on the issue of who should and should not be granted bail. The issue of financing bond premiums and whether it should be allowed is also being discussed.
WSBAA is also concerned about the spread of deposit bail in their state. I shared my opinion that a move to a law prohibiting the financing of premium would provide fertile ground for growth of deposit bail. Given a choice between depositing ten percent of the bond with the court and no strings versus paying a bail agent a nonrefundable ten percent premium with collateral and check-in requirements would be a losing proposition for the bail agent. It’s human nature to take the path of least resistance. That’s great for the defendant, not so great for local residents concerned with their personal safety.
Next Up
Looking to October, there will be annual association meetings taking place in California, Texas and Indiana. Check my event calendar for details.
Click “comments” at the beginning of my blog if you have something on your mind.