El Paso, TX – There has been an ongoing battle between the Professional Bondsmen of 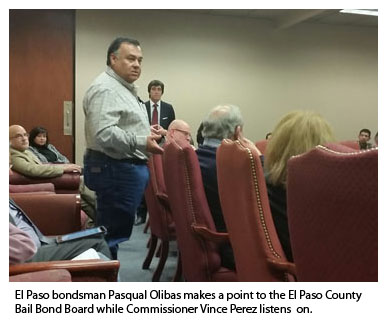 El Paso County and Commissioner Vincent Perez and his proposal to combine the various pretrial release offices into one department.  The local bonding community believes Commissioner Perez intends to expand the use of PR bonds to the detriment of the community.

I attended a meeting of the El Paso County Bail Bond Board last week.  Commissioner Perez was present at that meeting to report on his progress.  He assured board members and those bondsmen in attendance the intent of his proposal was not to put bondsman out of business, that PR bonds were a very small part of his initiative.  Personally, I was not convinced.

Commissioner Perez spoke of his recent trip to San Antonio where he obtained a first-hand look at the Bexar County Pretrial Release Program.  He believes El Paso should model their program after the one used by San Antonio.

Perez said the Bexar County Pretrial Release Program had little impact on the amount of bail written in San Antonio.  After the meeting, I contacted a local San Antonio bondsman who told me twenty-five percent of those arrested in Bexar County are released on a PR bond.  The result has been thousands of outstanding warrants issued for failure to appear and millions in uncollected forfeited PR bonds.

Judge Angelica Barrill is the Chair of the El Paso County Bail Bond Board.  She asked Commissioner Perez to include a representative of all stakeholders in future meetings regarding his proposal.  This includes a representative of the local bonding community.

The Professional Bondsmen of El Paso County has a fight on its hands and will need the help from the larger bonding community if they are to win this battle.

El Paso County Bail Bond Board also discussed plans to move to an E-Bond system within the next 120 days.  Training classes will be held for bondsmen and surety company representatives in the coming weeks.

More and more counties and states are considering a move to E-Bonds similar to what is currently done with the Federal E-Bond System for posting Immigration Bonds.

Currently Smith County is the only county in Texas currently using E-Bonds.  Conceptually, it’s a good idea, it saves time and money and the surety is instantly informed whenever a bond has been issued.  The challenges lie in the area of security and preventing fraud.  For example, there must be security measures in place that confirms the person submitting an E-Bond is in fact authorized to do so.  These concerns may very well have been worked out.  We will find out in the coming weeks.  One thing is for certain, E-Bonds are coming so we may as well prepare and participate in this evolution.