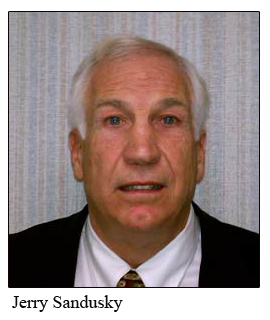 counts of sexual abuse of young boys, was released on a $100,000 unsecured bond or more accurately described as being released on his own recognizance. Sandusky was not required to pledged collateral to the court, obtain a bail bond or call friends or family to stand up for him. The only call he had to make was to a taxi service to ask for a ride, “because they’re letting me go”.
Pennsylvania District Court Judge Leslie A. Dutchcot, the judge who ordered Sandusky released on a free bond, has come under fire for her decision.  Questions have been raised as to her impartiality and her ties to Sandusky through The Second Mile, a charitable organization to help kids.
The bail industry continues to press state legislators to restrict alleged offenders like Jerry Sandusky, who have been charged with aggravated offenses, from being eligible for free bail in the form of release own recognizance, 10% deposit bail or free release through a taxpayer funded pretrial service agency.  Unfortunately, only a few states like Georgia have seen the wisdom in passing bail restrictions legislation. Legislation that would require offenders charged with aggravated crimes like child molestation to post a secured bail bond.  In Georgia, a bail bond would be required in a criminal case similar to Sandusky’s.
New Jersey just passed legislation (A1491) that would require a bail bond in those cases where a defendant has been charged with domestic violence.   Criminal defendants must be granted reasonable bail based on their crime and risk of flight. Releasing offenders charged with aggravated crimes on anything less than a fully secured bail bond is simply irresponsible. Releasing an aggravated offender on an unsecured bond is an affront to the victim and the general public.
Every state legislature should consider passing bail restriction legislation that would prohibit offenders charged with aggravated offenses from being released from jail on anything but a fully secured bail bond. It’s right for victims and its right for public safety.