27Feb 2012 by tkanger
Las Vegas, NV – Georgia bondsman Scott Hall is the new President of the Professional Bail Agents of the United 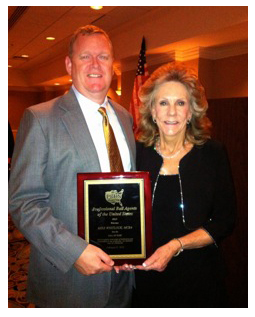 States. He won a close election over Connecticut’s Mary Casey. Scott brings many years of bail experience and extensive knowledge of running a business to the position and an impressive track record of legislative achievements as part of the legislative committee of the Georgia Association of Professional Bondsmen.
Also up for election were the Senior Vice President, Treasurer and Secretary. Beth Chapman – that’s right, Mrs. Duane “Dog” Chapman – was elected Senior Vice President while Pam Jackson retained her position as Treasurer and Maggie Kreins was voted in as the new Secretary.
Guest speakers included Dennis Bartlett, Executive Director of the American Bail Coalition, and Chief Circuit Court Judge John G. McBain of Jackson County, Michigan. Judge McBain prefers bail bonds to any other form of release. He loves the idea of being able to pick up the phone and contact a bail agent when their client has failed to appear for court. He’s even made the call from the bench.
Awards were handed out by outgoing President Linda Braswell.  The President’s Award went to Scott Hall, Individual of the Year Award to Bill Kreins and the Bail Agent of the Year went to Jeff Kirkpatrick. As a pleasant surprise I was inducted into the PBUS Hall of Fame along with American Surety Company Vice President Dan Amato.
I really enjoyed the conference this year. The elections made it interesting, and the American Surety Company Agent Appreciation Event at Voodoo Lounge was a blockbuster. We had a great turnout and everyone had a great time. The annual conference is, in part, about the celebration of the bail agent and the commercial bail industry. I’m looking forward to the positive changes that will surely come with the new PBUS Board of Directors.