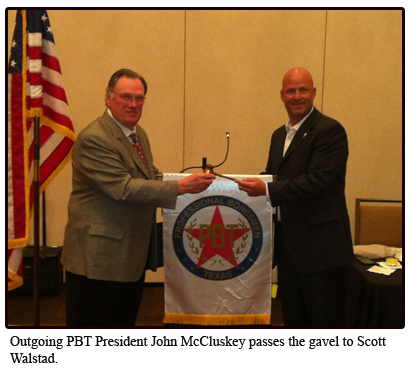 Association’s President. John was at the helm for four years and I believe most would agree he was an effective leader.
John was tireless in his efforts to have a positive impact on commercial bail in Texas. As part of the Legislative Committee he spent a significant amount of time in Austin promoting the bail industry and derailing legislation like S498 that would have introduced deposit bail in Texas.
John was also key supporter in creating a partnership with the Steven G. Whitlock Memorial Golf Tournament, raising nearly $100,000 for Camp Esperanza in the last three years. PBT had not been formally affiliated with a charity prior to John’s tenure.
John turned over the reins to Dallas area bondsman Scott Walstad who had been serving as Vice President and the Legislative Chair. Scott went unopposed for president in the election held last week. Davie Westmoreland of Bryan, Texas is the new Vice President.
This year’s annual meeting was held at the Westin La Cantera Resort in San Antonio, a departure from The Menger Hotel where the fall meeting had been held for many years. The meeting consisted of a golf outing, cocktail party, general meeting, elections, auction and casino night (Click here to view a photo slide show).
Several awards were handed out to deserving members. Gene Newman received the PBT Award of Distinction. Davie Westmorland and John McCluskey both received the Professional Bondsman of the Year while Ken Good received the Legislative Award of Excellence. A number of members received their ten, fifteen or twenty-five year pin while John McRae received a pin in recognition of his 35 years as a member of PBT.

All in all it was a memorable few days in San Antonio.