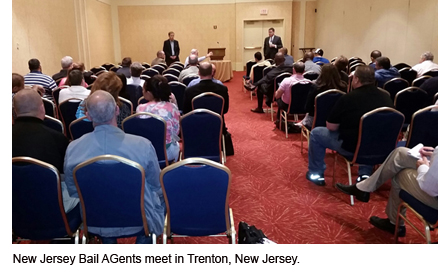 Two weeks ago I was in Trenton, New Jersey for a meeting of bail agents and representatives of the American Bail Coalition.  At issue was the passing of S946 which created a statewide pretrial release system.  Governor Christie was successful in pushing through this new bureaucracy that will cost New Jersey taxpayers hundreds of millions of dollars over the next ten years.

While having lunch with a bail agent from Bakersfield, California last week I learned SB 210 was in trouble (trouble being a good thing in this scenario).  Until a few weeks ago SB 210, which favored risk assessment tools and releasing defendants on their own recognizance was sailing through the California General Assembly after having passed out of the Senate.  Upon my return to Indianapolis, I received an email from the American Bail Coalition that announced SB210 was sent to the inactive file, rendering it effectively dead.

Whenever bail agents and sureties work together as was the case in California, there is nothing that cannot be accomplished. Tenacity is one of the key characteristics of any successful bail agent and failure is never an option. Congratulations to those who stepped forward and fought to win this important battle.

What we know about any undertaking is that failure is a possibility, but so too success.  We may have had a temporary setback in New Jersey, but California’s effort was a success that will embolden bail professionals to keep pressing forward, to fight for the survival of a bail system that is the foundation of the criminal justice system.  After all, without a defendant in court, justice cannot be carried out.

Bail agents, you are the lynchpin that makes the system work; our state representatives just need to be reminded of this from time to time.  Let’s continue to work as a team in preservation of our profession.