Michigan City, Indiana – Hoosier bail agents gathered in northern Indiana this past Saturday for the ISBAA’s annual spring meeting.  The meeting was held at the Blue Chip Casino and included six hours of continuing education.  All bail and recovery agents will need to obtain the required continuing education credits prior to license renewal this fall. 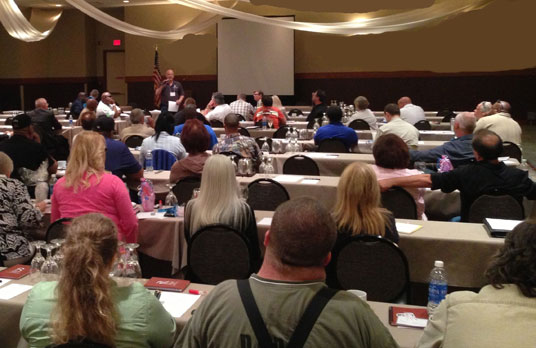 This meeting was anticipated with a particular buzz of excitement, resulting in one of the larger turnouts in recent memory.  Bail agents in Indiana are genuinely concerned about their future.   The amount of bail written in Indiana has been reduced by more than 70% in just eight years.  This sizable reduction can be attributed not to a reduction in crime, but rather an increase in the use of the ten percent cash option offered by the court.

As I reported earlier this year, Tippecanoe County is the latest casualty.  With just sixty days notice, this area, home to Purdue University, instituted a new bond schedule that included a ten percent cash option on all bonds $5000 and under.  The bail agents in Tippecanoe reported an instantaneous reduction in business by as much as ninety-eight percent.

This meeting included a two-hour panel discussion on the concept of repealing Indiana’s no-credit law and other ideas that could bring about positive change to public safety in Indiana and, by extension, the commercial bail industry.  I was a member of the pane, which included Lee Sexton, Bob Dawson, Tony Widgery, John O’Byron and Josh Stroufe.  The panel was moderated by Nick Wachinski.

The panel discussion was cordial for the most part and heated at times.  Bail agents in Indiana are very passionate about their profession.   With current law requiring premiums to be paid in full prior to posting a bond, Hoosier bail agents are simply not familiar with the concept of payment plans.  Many are slow to embrace the idea of credit bonding even though extending a payment option to their clients may be the very thing that can save their profession long-term.

Indiana statute allows a court to offer a defendant a cash bond option of up to 100% of the bond amount and not less than ten percent.  Court and county officials are no fools.  Their goal is to simply use cash bail money to pay fines, costs and public and private attorneys.  From the beginning, the courts viewed bail agents as a competitor and treated them as such.  It was for this reason they cleverly set their cash deposit requirement at an amount equal to the premium charged by bail agents.  Defendants would readily pay the court ten percent with no strings as opposed to a bail agent who has a host of conditions and requirements to ensure appearance, including a financial incentive to apprehend them, should they fail to show for court.

As a member of the panel I did my best to paint an accurate picture of the current state of commercial bail in Indiana and make the argument that at this time in our state’s history, repealing Indiana’s no-credit statute and permitting a defendant to always have the option to post a bond is the answer to our problem.  Making these changes would allow a bail agent to write bail in every county in the state.  Facilitating this would be extending the option to a criminal defendant to pay their premium in installments, as they are able to do with a myriad of other products and services.   Payment plans in no way lessens the surety’s guarantee of the full bond amount.