16Nov 2012 by tkanger
The historic city of Savannah, GA was not as inviting as it can be as attendees of the meeting of the Georgia Association of 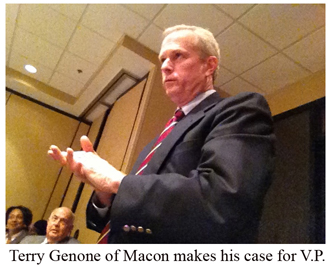 Professional Bondsmen were met with a cool rain and stiff breeze. However, it didn’t take long for things to heat up inside the Hyatt Regency where the election of GAPB officers and directors was taking place.
It was standing room only in the stuffy meeting room where the air was electric and candidates were working to secure votes from GAPB members. It was all, outgoing GAPB President, Jared Skelton could do to keep control of the room while we all heard from the candidates making their case for why they were the most qualified to serve in the positions they were seeking.
In the end, Scott Echols was elected President, Charles Shaw, Vice President, Doug Cotter, Treasurer and Jennifer Ricks retained her position as Secretary. Scott has a tough act to follow where Jared is concerned. Georgia saw significant, bail friendly, legislation passed during his administration. GAPB has developed an impressive track record over the past several years and we can expect this to continue under Scott Echols leadership.
This meeting was not all about the election, the GAPB held its annual Blowout for the Georgia Sheriffs who were in town attending their own conference. This annual gather is held at The Warehouse on River Street. The turnout was excellent and everyone seemed to have an enjoyable time.
The GAPB conference ended with Dale Neese receiving the GAPB Service Award. Dale continues his battle with melanoma. His business partner, Janice Grimes, accepted the award on Dale’s behalf.
Click to View Meeting Pictures