02May 2011 by tkanger
Shelton, WA – The Washington State Bail Agents Association held its Spring Meeting at the Little Creek Casino south of 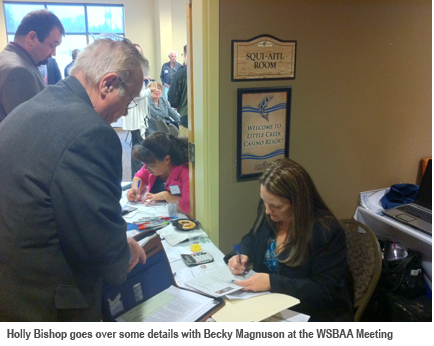 Puget Sound last Thursday. The morning was devoted to continuing education with the general meeting held in the afternoon.
On the legislative front, nothing passed in the 2011 session that will impact bail in this state.  There has been significant debate on the issue of how much premium a bail agent should collect prior to posting a bond.   The amount included in legislation is 5% of the bond (50% of the premium). This bill is not expected to pass this year but we can expect to see it again in 2012.
I was surprised to learn of the expanding deposit bail operation in Washington. Apparently, there is no statute on the books that provides for the courts accepting a ten percent deposit on a bond in lieu of a bail bond or full cash. Several counties in Washington have simply decided they were going to enact a local rule regardless, law or no law. They do that sometimes.
There was a lengthy discussion on what to do about the illegal acceptance of ten percent deposit. I shared some ideas on how we have been dealing with deposit bail in Indiana where it is currently legal. I also stressed the need to be proactive in eliminating this practice as the use of deposit bail will continue to spread throughout the state once the courts become blinded by the revenue (sans risk or accountability) and forget what the true purpose of bail really is, to guarantee a

defendant appears in court, each time, every time.

Every state should be paying attention to what is occurring across the country and learn from their sister associations on what is being done to address these efforts of government encroachment on a service best provided by the private sector.