The meeting was productive with Lynn Brown, CEO of Advocates for Public Safety, making a presentation on the projected unintended consequences of AB 109 – Prison Realignment.   The released of tens of thousands of “low level offenders” from California State Prison has created a crime wave through the state.

Unfortunately, there are felons convicted of aggregated offenses who are being classified as “low level offenders” release back into society resulting in an increase in violent crime and crime in general.

I met with Assemblyman Curt Hagman at the State Capitol to discuss impact of AB109 and bail issues in general.  Assemblyman Hagman is a licensed bail agent who is in the final year of his second term in the General Assembly.  He is running for a seat on the San Bernardino Board of Supervisors.

Curt, I can call him Curt because I’ve known him for 20 years, says the bail profession must come forward with solutions to help ease prison crowding and the ever increasing failure to appear rate for defendants released on their own recognizance.

State prisoners being housed in county jails are commanding the majority of bed space meant for pretrial detainees resulting in a breach of the jail’s population limit. This breach then creates a need for releasing pretrial detainees with bail as high as $500,000 on their own recognizance.

Curt believes we should continue to push for the implementation of a post conviction bond that would provide a guarantee of appearance by convicted felons the parole board deems worthy of early release.  Curt also endorses the concept of a state recommended bond schedule and an automatic trigger on bail reductions when a jail’s population limit has been breached.

Assemblyman Hagmans time in the California General Assembly has been very productive.   As a Republican and therefore in the minority, Curt has authored more than 40 bills that have passed into law. This is impressive by any standard.

Curt ended our meeting by stressing the need for the bail profession to remain engaged in the legislative process, advocating meaningful legislature that will both improve the bail profession but also enhance public safety.  Bail agents must provide solutions to existing problems if we are to be taken seriously.

My travel buddy this week was American Surety Company’s Vice President Tom Anderson.  We found time in our busy schedule to travel to Roseville where we met with Rob Dick, owner of California Bail Education School.  Rob gave Tom and me an overview of his class and allowed us both to shoot a Glock 19 and an AR-15 in his action shooting simulator.  I haven’t had that much fun in a long time.  I would recommend his class to anyone.

Tom and I will both be in Las Vegas next week for the PBUS Winter Conference.  Be sure to ask us about our experience with the shooting simulator, particularly how I bested Tom on the range.  I have no doubt Tom will agree with me on that point. 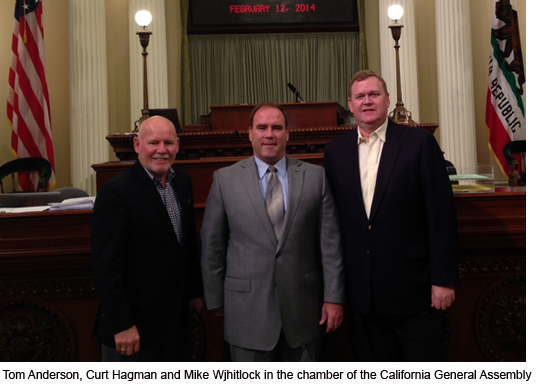