22Oct 2012 by tkanger
The U.S. Department of Justice, Bureau of Justice Statistics recently released its report Criminal Victimization, 2011. This report reveals some alarming statistics with respect to the increase in crimes nationally.
According to the BJS report there was a 17% increase in the overall rate of violent victimization per 1000 persons age 12 and older. The rate of violent crimes increased from 19.3% in 2010 to 22.5% in 2011. Household burglaries increased 14% in 2011 over 2010.   Property crimes also saw an increase of 11% year over year.
In my view the alarming increase in violent crimes is due, in part, to the departure by many courts across the country from guaranteeing the appearance in court of criminal defendants with a bail bond. They instead use release options designed to generate revenues for the court or the expand the use of taxpayer funded pretrial release bureaucracies with no obligation to deliver results.
In an article published by KPCNEWS.net, October 14, 2012, by Bob Braley entitled Bail Bounty?, it was reported that Noble County, Indiana was moving toward a 10% deposit (90% discount) bond program as opposed to requiring bail bonds to guarantee a defendant’s appearance in court.
The judges interviewed for the article were particularly concerned about the defendant getting their money back and the benefits received from cash bail deposits i.e. the payment of costs and fines.
The perceived concern of these Noble County judges that criminal defendants not incur the costs of a nonrefundable bail bond premium rings hollow. First, the bond premium or 10% cash deposit is usually made by a third party, family, friends, etc. In the case of the cash deposit option paid to the court, the money, by law, is receipted in the defendant’s name. Why? Because this gives the court and the state access to these funds to pay any costs or court fees related to the criminal case and any other amounts owing the state for taxes, back child support, etc.
Furthermore, the court does not make any effort to reduce the amount of court costs and fines or providing a criminal defendant with a free attorney. No, these judges instead elect to remove the one cog in the wheel critical to a successful prosecutorial process, the guaranteed appearance of the defendant!
Noble County along with several other counties in Indiana has elected to place their fiscal needs of their court ahead of the safety of their residents and the best interest of victims of crime.  With the attitudinal shifts regarding bail requirements as being seen in Noble County, is there any wonder we are seeing an increase in crime nationally?
State Association News
It’s a busy time of year with state association meetings held recently in California, Indiana, South Carolina, Washington and upcoming meetings in Georgia, Louisiana, North Carolina and Texas. I was able to attend meetings in a few of these states; here’s what I learned.
South Carolina – The SCBAA met in Columbia October 10th. As with nearly every SCBAA meeting, there was a continuing education component. There was significant discussion regarding enacted legislation, supported by SCBAA that states, a bond expires after 36 months if certain conditions are met. SCBAA meetings always seem to have 75 bail agents or more in attendance. This association is very well organized and proactive in the preservation of commercial bail.
California – The California Bail Agents Association returned to Harrah’s Hotel and Casino in beautiful Lake Tahoe October 14-17 for their one and only meeting of the year.  The last two years in California have been tumultuous to say the least with respect to criminal justice. The passing of AB 109 has had a lasting impact on not only the criminal justice system but public safety. Many jurisdictions around that state are reporting an increase in crime due to the early release of convicted felons from state prisons.
In this last session, California’s General Assembly considered the expanded use of GPS monitoring in lieu of bail bonds and making every arrestee eligible for release on their own recognizance. Fortunately, both efforts failed. Look for these issues and more to resurface in 2013. A united front by representatives of the commercial bail industry will be critical if we
are to curb the pursuit of legislation friendly to criminal defendants and harmful to public safety minded Californians. 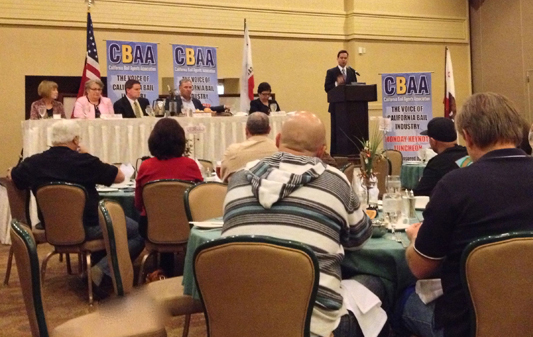 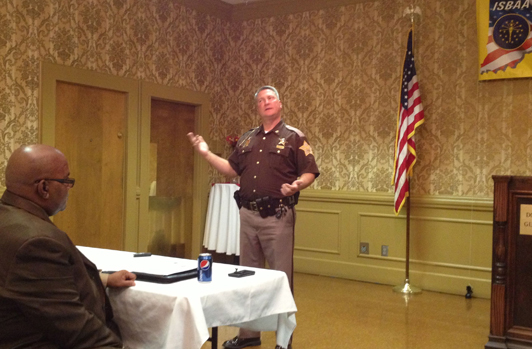 Allen County Chief Deputy David Gladieux speaks to Indiana Bail Agents.
A Fugitive Recovered, An Anecdote
Earlier this year, a veteran Florida bail agent wrote a large bond for a drug offender arrested and jailed in a small Louisiana parish. The defendant failed to appear for court and the 180 day forfeiture clock began to tick.
The agent immediately stopped what he was doing and began searching for the defendant in the usual ways; calling known contacts, visiting locations the defendant disclosed on his applications and performing online searches.
Days, weeks and months passed by before they finally received a tip the defendant was seen in the Los Angeles area. They were within 14 days of the due date. The veteran bail agent and his recovery agent ultimately made two cross-country trips to the west coast before the fugitive was finally apprehended.
With the fugitive in cuffs they arranged for a commercial flight that would transport them all to Louisiana. From the airport they drove for a few hours until they reached the small parish jail.  There being no sally port they asked someone standing on the sidewalk outside the jail, who appeared to be a jail staffer, where they could surrender a fugitive. “Who you got there?” she asked. Looking in through the window she said, “Wow! I can’t believe you got this guy, you’re going to make a lot of people very unhappy.”
The veteran bail agent and his recovery agent walked the defendant into the jail where they met with the prosecutor. The prosecutor congratulated the duo for apprehending the fugitive then expressed his grief over losing out on the big bond forfeiture payment. “I was just discussing with our clerk over lunch how I excited I was we would be coming into a lot of money in a few days,” he recounted.

You see, the veteran bail agent and his recovery agent received little or no help from the small parish sheriff’s office during the several months they searched for the fugitive. The court was trying to get the money while the veteran bail agent was trying to save the money by recovering the fugitive, which is what he did. He did his job. How refreshing.