Indianapolis, IN – Lee Sexton, a general agent out of Ft. Wayne, had just completed his testimony before the Commission 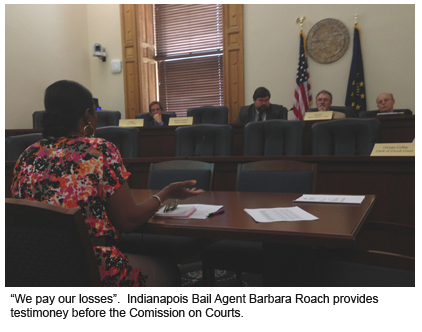 on Courts, chaired by Senator Brent Steele, R-Bedford.  It was the afternoon of Thursday, July 18, and we were in room 421 of the Indiana State House.  Lee nodded at me, as if to say, “You’re next.”  I took a seat at the table and introduced myself.

I must preface, I have no fear of testifying before a group; speaking about my chosen profession provides only exhilaration.  I may even have been too eager to testify.

Those waiting to speak were seated in the front row of the hearing room. Early on in the hearing, I leaned towards Bob Dawson, a fellow surety representative, and whispered, “Is it arrogant of me to think I could answer all these questions?”

“Yes,” he replied.  Frankness, I respect that.  With his answer in mind, I checked my confidence before stepping up to testify.

As confident as I was, I knew that this was an important opportunity for the bail industry. Bail agents in Indiana have been waiting for many years to have the opportunity to speak frankly before a legislative body about the deterioration of the bail system in our State.  This deterioration is the result of the encroaching deposit bail option, otherwise known as the 90% discount. It isn’t working.

Several bail-related bills failed to pass earlier this year, prompting the state legislature to place bail in the summer study committee with the Commission on Courts. Sen. Earline Rogers, D-Gary, was instrumental in getting bail placed with the Commission on Courts. Her bill, SB 425, would redirect a portion of the late surrender fees on bond forfeitures to a newly created County Electronic Monitoring Fund for indigent defendants. This bill did not make it out of committee.  In response, Sen. Rogers urged the Commission on Courts to permit her to present testimony in support of her bill. The committee obliged her with the condition Indiana’s bail system would be discussed in its entirety.

I was one of a variety of bail representatives signed up  to provide a testimonial. As I mentioned earlier, I jumped at the chance, eager to share my thoughts and experience. I began my testimony by answering a few questions posed to earlier witnesses:  Yes, we can provide, today, a breakdown of Indiana Counties as to the percentage of bail being written versus the percentage of deposit bonds being posted directly with the court.  Yes, we do pay bond forfeitures in this state.  Six of the sureties companies and their agents paid one million in forfeitures in 2012.  Yes, we can document this figure.  Yes, there has been a steep decline in the number of bail bonds written over the past ten years.

I also took the opportunity to launch an offensive on the deposit bail option that is favored by a number of counties throughout the state. I explained that courts have systematically repurposed bail, changing it from a guarantee of appearance to a guarantee of payment of fine and costs.  Although the law says the court can set a cash deposit requirement to secure bail – up to one hundred percent of the bond but not less than ten percent – courts are using this as a tool  of manipulation. They calculatingly set the percentage at ten percent, specifically to compete with bail agents who charge a ten percent premium as payment for a bail bond.  Jailors in these county jails act as salesmen, pushing the ten percent option over a bail bond, telling defendants the premium for a bail bond is nonrefundable, as opposed to the mythical refund  of their cash deposit bond upon completion of their case.  That’s a  persuasive sales pitch, coming from someone who literally holds the key to your freedom.

Current Indiana law does not permit a criminal defendant to select for him or herself how they wish to secure their bond, be it full cash, real estate, or bail bond.  A judge from Hendricks County, who later testified before the commission, said he believed that the method by which the bail is secured should be set at the discretion of the judge and not the defendant. This is analogous to a car salesman setting the price on a vehicle and then proceeding to tell the buyer how he or she is going to pay for it, be it lease, full cash, or bank loan. That level of power is an overreach.

The judge went on to claim that deposit bail works. Nobody fails to appear in his court.  He does not require a  bail bonds, instead he sets a ten-percent cash deposit or releases defendants on their own recognizance.  Amazingly, he immediately contradicted himself by explaining that when local bail agents had pointed out that he was indeed entering “failure to appear” on the record, he changed his procedure and reclassified these no-shows as “failure to perform”.  He said some defendants had an acceptable excuse and should not be unfairly punished.  I sat there wondering how he knows the excuse before he hears it from the defendant.  He made it very clear his concern was for the defendant – he never mentioned public safety or the victims of these criminals.  This judge’s inference was that he doesn’t place the burden of obtaining a bail bond on these poor, unfortunate criminal offenders.

During my testimony I mentioned, Marion County (Indianapolis) was generating 1250 “failure to appear” warrants each month, adding up to 15,000 a year.  Some counties, who claim a bail bond is always an option, take evasive action anytime a bail agent attempts to post a bond. This stance only differs from the Hendricks County judge in method, using another type of avoidance to wipe out bail bonds.

Looking back on the hearing, the testimony from the bail profession did an effective job of painting a picture, for the bi-partisan commission. The current bail system is broken.  Deposit bail was exposed for what it is: a blatant effort to generate revenue for the counties at the expense of public safety, the assurance that defendants appear for court, and the adjudication of criminal cases.

It has been proven time and again that bail bonds are the most effective form of pretrial release.  Our job is to provide enough data to the Indiana Legislature’s Commission on Courts to where they can make the logical, fact based determination; a criminal justice system that employs a greater use of bail bonds is a more effective system.