02Jul 2012 by tkanger
We lost a friend and neighbor last week after a fourteen month battle with breast cancer. She was a doctor, young wife and mother of three. A California bail agent and longtime friend confided in me recently she’s been diagnosed with breast cancer. Another friend and bail agent in Georgia has an ongoing battle with melanoma. We’re used to having a remedy in the bail profession; locate and recover your fugitive, avoid a loss. The lines are not so clearly defined in the battle with cancer. Cancer can be easy to find but hard to catch.
We lost my twin brother Steve in 1989 after he lost his battle with cancer. Steve had an inoperable tumor located in his brainstem known as a glioblastoma.  Senator Ted Kennedy (D-Mass.) died in 2009 of a brain tumor of the same type. Little progress has been made in the last 23 years to extend the life expectancy of this type of cancer, let alone a cure.
Soon after Steve’s death our family decided to establish a golf event to raise money for a charity in his memory. Steve was a people person and loved kids so we sought out a charity that would benefit kids battling cancer. That charity was Camp Esperanza, a week long summer camp for pediatric oncology patients receiving treatment at the Children’s Medical Center of Dallas. Our objective was to raise money through an annual charity golf tournament to help underwrite the cost of sending brave kids in the battle for their life to camp for a much needed respite.
After a 20 year run The Steven G. Whitlock Memorial Golf Tournament sought out and received 100% support from the Professional Bondsmen of Texas. This partnership had an immediate impact on the level of participation within the bail community and the money being raised annually for Camp Esperanza.
The bail community’s participation has not stopped at the Texas state line. SGW receives financial support and player participation from bail agents and surety companies from around the country including California, Connecticut, Florida, Georgia, Indiana, Iowa, Louisiana, Maryland and Tennessee. Bail associations from California, Tennessee and Texas have made generous contributions.
We are so grateful to the national bail bond community for adopting The Steven G. Whitlock Memorial Golf Tournament and its charity Camp Esperanza making SGW perhaps the most supported charity by the bail profession in the nation.  Anyone who has participated in this event can tell you what a special feeling it is to help these kids who are in the fight for their life, enjoy much needed down time, rest and relaxation. Announcing the contribution amount at the end of each year’s event is truly the highlight of my year knowing the impact each year’s donation will make to the benefit of Camp Esperanza and the kids.
The 23rd Annual SGW Golf Tournament is now one month away being held on August 1st in the Dallas Ft. Worth area. There is still plenty of time to enter a foursome, make a contribution or signup to be a volunteer. If you’re coming in from out of town, plan on sticking around for the 3rd Quarter Meeting of the Professional Bondsmen of Texas. PBT is an excellent organization and the epitome of how a state bail agent association should be managed.
Thanks to the bail profession and national bail community for your support of these brave kids.
Online SGW Registration, SGWMemorial.com 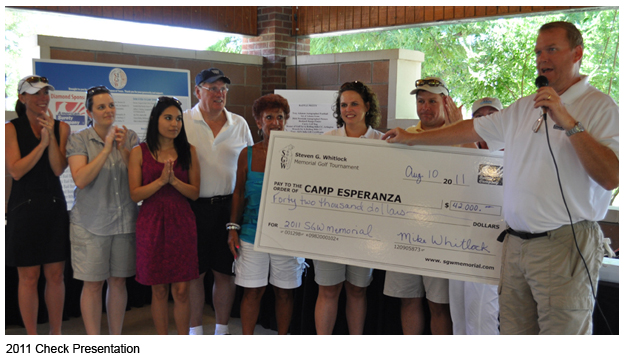