f the local bail bond community.  The purpose of the meeting was to discuss New York’s current bail system and efforts by some politicos to provide taxpayer funded bail to criminal offenders to the exclusion of bail bonds and to develop solutions to address their concerns.

New York City has a large criminal justice system with more than 10,000 people in jail on any given day.  Most criminal offenders are released on their own recognizance while a much smaller percentage is released on a secured bail bond.

New York State has a massive criminal justice system with many areas that require reform.  There are those who want to point to money bail as an area to either reduce or eliminate its use.  However, defendants released on a bail bond are more likely to appear for court than any other release option.  That’s a success, not a failure.

Beware the motivation of the person or entity who seeks the elimination of commercial bail bonds.  They are usually pushing their own agenda which involves their own version of a supervised released program typically underwritten by the taxpayers.

At the start of the week I was in Dallas, Texas for the 26th Annual Steven G. Whitlock Memorial Golf Tournament.  This annual charity event partners with The Professional Bondsmen of Texas to raise money for Camp Esperanza, a summer camp for kids battling cancer and receives tremendous support from bail agents throughout Texas and around the country.

This year’s event raised $45,000 sufficient to fund the cost of sending ninety kids to Camp Esperanza in July 2016.  The good people that work within the bail profession are warm, caring and giving.  I saw a lot of watery eyes when noted Texas bail attorney Ken Good spoke of his daughter Laurel’s participation at Camp Esperanza.  For all the kids who are fortunate enough to attend Camp Esperanza, and there is a waiting list, that week in the hot July heat is the most glorious time of the year for them.  Ultimately, it’s the supporters of SGW that are fortunate as we get the opportunity to help some really great kids.

Thank you to everyone who continues to support this great cause! 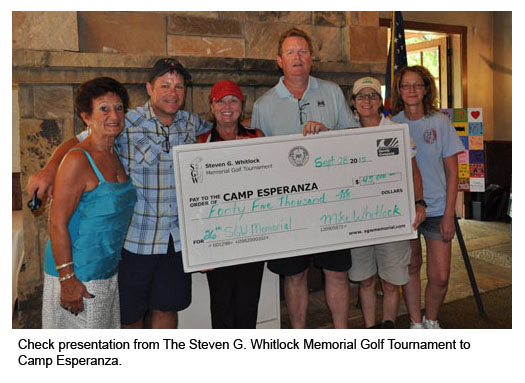