12Jan 2012 by tkanger
While in the Mile High City last week, I met with some of our bail agents, attended a meeting of the Committee on Criminal and Juvenile Justice (CCJJ) to hear a presentation on bail bonds and made a guest appearance on "In the Lobby" on WKRP Radio to discuss the bail bond industry.
The Colorado Bail Industry has been hit pretty hard lately. Not only because of the poor economy, but also because some courts have stopped setting surety bonds in lieu of small cash bnods with no option of posting a bail bond.
You may recall my reporting on SB11-186 (Alternative Bond) last year. This bill would have created a percentage cash bond managed by the local public Pretrial Release Agency. After a lengthy legislative battle SB11-186 failed to pass. Look for a similar bill to be in the upcoming session.
The CCJJ was behind the effort to introduce the Alternative Bond and it was a representative of the CCJJ who was called to the carpet during a committee hearing for not inviting a representative of the bail industry to sit on their committee. The CCJJ took immediate steps to remedy this oversight by inviting current PBAC President and local bail agent Steve Mares to join their committee.
The CCJJ held a meeting January 6 in Lakewood, Colorado where Steve Mares and fellow bail agent, Jason Alexander, made a two-hour presentation on commercial bail bond procedures.  I attended the meeting as a spectator; only committee members were allowed to comment.
Steve and Jason did an excellent job with their presentation. They took a number of questions from the other committee members. One in particular, is it true most defendants who FTA while out on bond are arrested by law enforcement? Steve did a great job dispelling this myth by explaining 1) bail agents will make every effort to reinstate a bond without surrendering a defendant if there was no intent on the defendant’s behalf to flee; and 2) many times when a bail agent is surrendering a defendant to the county jail the duty officer will not provide a body receipt opting instead to put themselves down as the arresting officer in order to receive credit for the arrest. With the officers taking credit for the arrests it creates a false impression that bail agents are not responsible for the recovery of their fugitives. Committee members seemed to grasp the explanation.
Before I made my trip I was invited by lobbyist Cork Kyle to be a guest on his daily radio show, "In the Lobby". I appeared on air last Wednesday and thoroughly enjoyed my first opportunity to do radio.  While nervous at first, I quickly got into the discussion, as I’m quite comfortable when I’m talking bail.    It was a friendly environment as Corky represents the Rocky Mountain Bail Agents Association and it was a good experience. (Listen to my radio interview).
All eyes will be on Colorado again this legislative session watching for another effort to pass Alternative Bond legislation. The Colorado bail industry will also be working with the legislature on the proposed Sunset revisions. The regulation of bail by the Colorado Department of Regulatory Agencies is up for renewal and there have been several recommendations made by The Bail Bond Advisory Committee established last year. I will keep you posted as the situation develops.

It’s a new year with new challenges. Together, as a cohesive unit, we continue to promote the effectiveness of commercial bail bonds as a critical component of the criminal justice system. 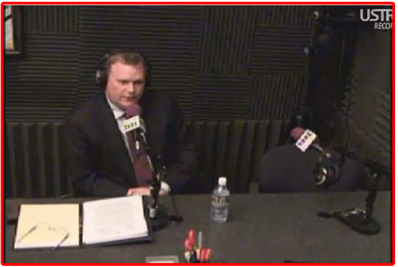 Click on the picture to listen to my radio interview.